Corey’s Digs is honored to spotlight these incredible sponsors who are bringing you some of the most informative and current news that mainstream news refuses to report on. Independent journalism and new media is the way of the future. Support your favorite sources, and together we can make an impact.

SGT Report is the corporate propaganda antidote, the antithesis of mockingbird media mainstream “news”. Providing exclusive original content and the very latest breaking REAL news & information from the world’s most trusted alternative media sources, SGT Report is your daily source for truth, in a time of universal deceit.

Get the News from SGT Report:
SGTreport.com
SGTreport.tv
Twitter

Sarah Westall’s Business Game Changers covers innovation, disruption, and the biggest issues. Digging and finding the most impactful changes and events occurring in the world and bringing you the world’s top experts who can shed light on the subject. Some of the episodes are exhilarating and others are dark. The main objective is to shine light on events, discoveries, and happenings that have the greatest potential to change the world regardless if the topics are politically controversial.

Get the News from Sarah Westall
SarahWestall.com
Twitter
Bitchute & Odysee

The Program: Inside the Mind of Keith Raniere and the Rise and Fall of NXIVM

A jaw-dropping look into the world of the so-called “Hollywood Sex Cult” NXIVM chronicling the rise of the enigmatic cult leader, Keith Raniere from former girlfriend, turned whistleblower Toni Natalie. The test subject for his coercive control, she was chosen to give him a child, but she left him instead. Labeled, a suppressive, a parasite, this a cautionary tale for anyone who might dare challenge NXIVM.

RedPill78 is an author, researcher, citizen journalist and host of Red Pill News on YouTube, a daily program detailing the most important stories of the day.  Often focusing on exposing corruption in business and politics, RP78 also hosts a weekend livestream where he interviews interesting people with incredible stories.

The McFiles is a nightly podcast with host Christopher McDonald, bringing nightly perspective and truths Monday through Thursday 7PM and 10PM, with great guests and a Friday night wrap up show of news headlines from across the nation and the world. Our Sunday faith shows airs at 11AM and 8:30PM EST.

Exposing the links between all forms of sexual exploitation; from the public health crisis of pornography to sex trafficking to prostitution & more.

The Speaker, Edge & Corey’s Digs produce a weekly podcast that comes out every Friday, covering hot news topics of the week and diving into investigative reports that Corey or Edge has recently published. Dig It! provides facts, insights, and opinions with a mix of humor to lighten things up. Available on several platforms so you won’t miss a Dig!

Get the tools you need for digging, with resources, background search database, secure search and secure email. Plus, tips on how to dig! 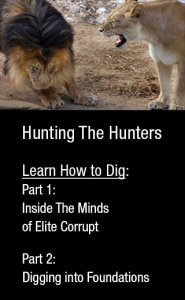